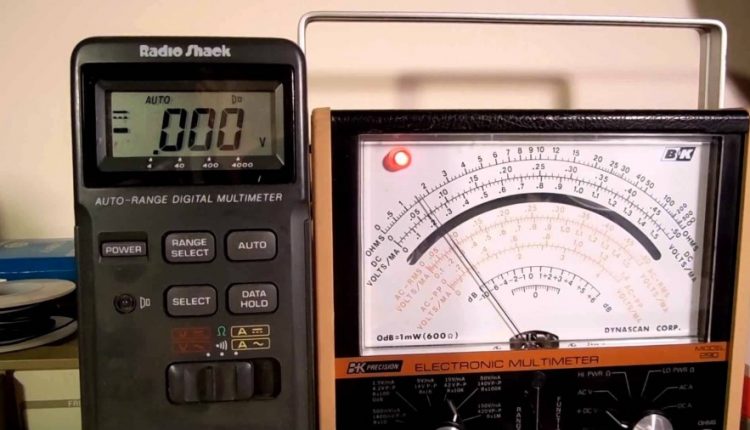 Which One Should You Prefer Among Digital and Analogue Multimeters?

Almost every one of you has once in your life have used the primary device to check current between two endpoints. It’s none other than a multimeter, which is still the king of the electrical engineering world.

A multimeter is profoundly used in electrical engineering, and that’s why it is one of the highly used electrical engineering tools. Now, big trouble comes between selecting analog and digital multimeter as both are different in terms of applications and functionalities. Undoubtedly, you can calculate electric current, voltage, and resistance, but which one is better and superior from the other?

Before we start comparing the two, you must know the primary difference between digital and analog multimeters. Digital multimeter is all about displaying digital data, whereas the analog device is more like a conventional speedometer. Showing digitally in digital meter and using needle scale in analog meter, is the only difference you can derive in two formats.

Most of you prefer a digital multimeter to get an exact value, and that’s where digital meter comes in use. Technology has changed a lot, and today, it has entirely migrated from analog to the digital world. In this upgrade, the analog display is completely migrated to the digital LCD that gives you a precise reading. With the accurate reading on your digital multimeter display, you no longer want to guess the current value.

The ease of use and accurate value display is the sole reason for the increasing popularity of digital multimeter. Furthermore, the same purpose has increased its demand and made it costly over an analog meter.

Benefit in Electricity Fluctuation:
Whenever electricity flows, it results in sudden fluctuation, and that brings a big difference in the readings. That’s why the initial reading is never considered as the exact one. In digital multimeter, you would never know the fluctuation as it displays a correct value.

However, on the analog multimeter, the variation is clearly visible as the needle scale up & down the rounded values, providing you with the fluctuation rate. This fluctuation rate is sufficient enough to determine an approx current value and is highly beneficial in identifying any potential problems in the electricity flow during testing.

Special Features in Digital Multimeter:
Nowadays, technology has come together, offering multiple features in a single device. Digital multimeter is one of its kind, where you will find temperature, power levels, RMS, and various other information that isn’t available in an analog meter. Analog multimeter is a traditional instrument that scales the needle with a change in current, voltage, or resistance; that’s all.

So, which among digital and analog should you go?
Ultimately in terms of features, a digital multimeter is nowhere in comparison with analog as it offers extensive functionalities. However, analog is always recommended for necessary testing and low-budget buyers.

Meghan Markle wants to write a book about this subject again