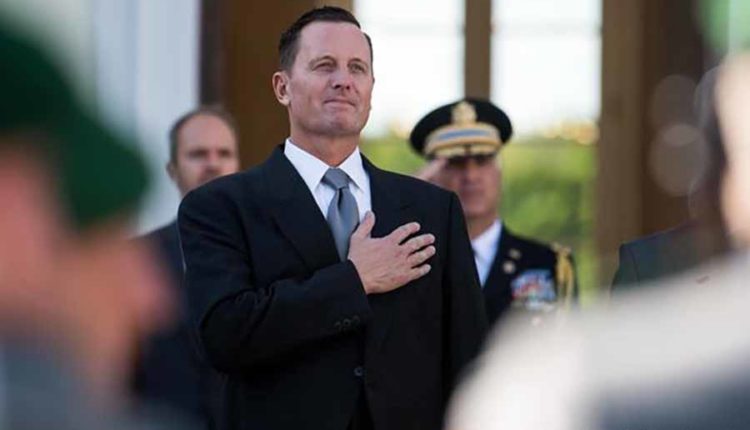 US ambassador to coordinate intelligence agencies

Richard Grenell returns to Washington. US President Donald Trump appointed the controversial diplomat as director of the intelligence services.

Richard Grenell, the US ambassador to Germany, will be the new acting secretary director of his country. The 53-year-old diplomat should temporarily coordinate the 17 different US secret services, said US President Donald Trump in the short message service Twitter. Grenell was a “highly regarded ambassador” and “extremely well represented the United States”. Grenell succeeds Acting Intelligence Director Joseph Maguire, who temporarily replaced Dan Coats in August.

Since Trump has appointed Grenell as acting director, the occupation does not have to be confirmed by the Senate. The New York Times cites an official source that Grenell should not vacate his post as ambassador to Germany, but will perform both tasks in parallel.
Grenell has been the highest US diplomatic representative in Germany since spring 2018. The Trump supporter used his ambassadorial office in Berlin for often offensive announcements to the federal government, thereby breaking with the usual diplomatic restraint. Shortly after taking office, Grenell called on German companies to withdraw from the Iranian business after Trump got out of the deal.

There was also much criticism for the ambassador in Europe when Grenell said in an interview with the ultra-right Internet portal Breitbart that he believed it was his job to strengthen conservative movements across Europe.

In August, Grenell threatened to partially withdraw US soldiers from Germany in the dispute over German defence spending if the federal government did not increase the defense budget. Previously, he had threatened the federal government in the debate about the involvement of the Chinese Huawei group in the establishment of the 5G mobile network with consequences for intelligence cooperation. Grenell repeatedly attracted the displeasure of German politicians for his interference and critical statements. For example, he called for the Nord Stream 2 pipeline project to be stopped and the companies involved to face sanctions.

“Marc Anthony is present at the wedding of ex-wife J.Lo”