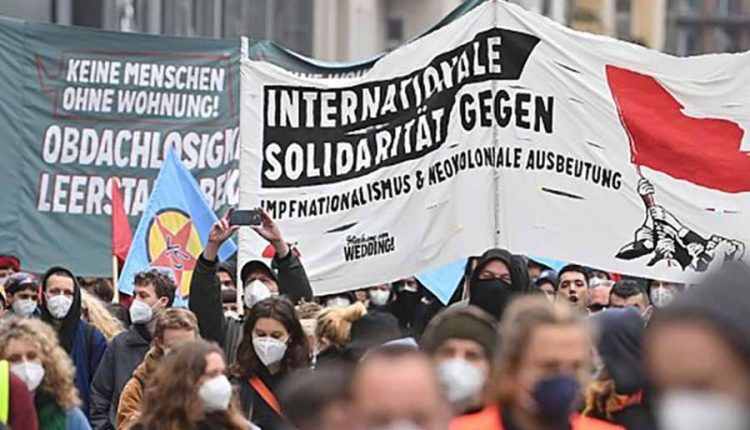 3,500 people demonstrate against capitalism and patriarchy

Hundreds of opponents of capitalism ran through the streets in the Berlin district of Wedding on the eve of May 1st. Protests were made against the patriarchy in Kreuzberg.
Around 3,500 demonstrators took to the streets on the eve of May 1st in Berlin, largely peacefully. According to the police, 1,500 people protested against capitalism and for social changes in Berlin-Wedding.

The protest march with mostly young participants started at Leopoldplatz. Police officers accompanied the demonstration on the way to the Gesundbrunnen S-Bahn station. The participants primarily adhered to the Corona rules; they wore mouth and nose protection.

“No return on rent” was chanted. The banners read: “The rich should pay”, “Housing, businesses and hospitals in our hands”, or “End homelessness”. Left and radical left groups called for the protest under the motto “From crisis to expropriation”.

According to the police, two people were arrested for a short time at the demonstration at the Wedding. Bengal fires were waved, and smoke pots lit on balconies and from the roof of a corner house as the demonstrators passed. After the rally at Gesundbrunnen S-Bahn station, the participants quickly dispersed.

Merkel announces that the vaccination prioritization will be lifted by June at the latest.

Discord is coming to PlayStation after Sony investment